The heavily marketed, highly touted, and Scripture-denying “Together 2016” event was held on the National Mall in Washington, DC on Saturday, July 16. Thousands gathered on the mall and watched by live stream for the purported purpose to pray for Jesus to “reset” the country and their lives.

The stream of celebrity evangelical “leaders,” pastors and musicians across the stage was essentially a who’s who of heresy. For the discerning believer who may have tuned in, markedly absent from the frenzy was a sense of reverence for a Holy God to whom appeals were being made to “fix our problems.”  Oh yeah, the real Gospel was conspicuously absent too.

I appeal to you, brothers, to watch out for those who cause divisions and create obstacles contrary to the doctrine that you have been taught; avoid them. For such persons do not serve our Lord Christ, but their own appetites, and by smooth talk and flattery they deceive the hearts of the naive. Romans 16:17-18

Below, then, is a list of those eager celebrity participants in the Together 2016 event who are effectively standing before the world, as well as before the true church, and proclaiming their willingness to disregard Scripture, such as Paul’s command in Romans. These evangelical “leaders” have become, by their own participation in a false festival promoting man-made unity, the very ones about whom Paul has commanded, “Avoid them.” 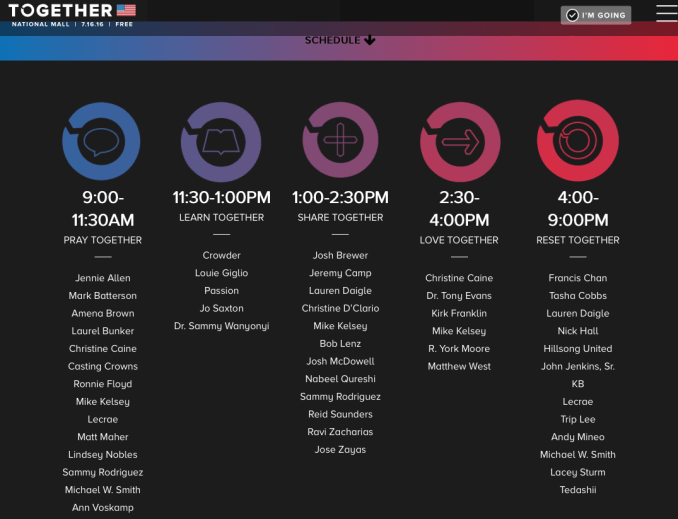 Others not listed on the website’s official line-up participated as well, but none perhaps as noteworthy as the grand apostate of the Tiber, Pope Francis. Francis delivered a gospel-void invitation to unite together as a means of combatting what he called youthful “restlessness.”

“God does not leave anyone disillusioned. Jesus is waiting for you. He is the One who planted the seeds of restlessness in your heart.” Pope Francis

Sounding like a late night TV infomercial huckster, Francis offered these words of comfort for those who might be considering trying Jesus.

“Give it a try! You have nothing to lose! Try it. Then you can tell me.” Pope Francis 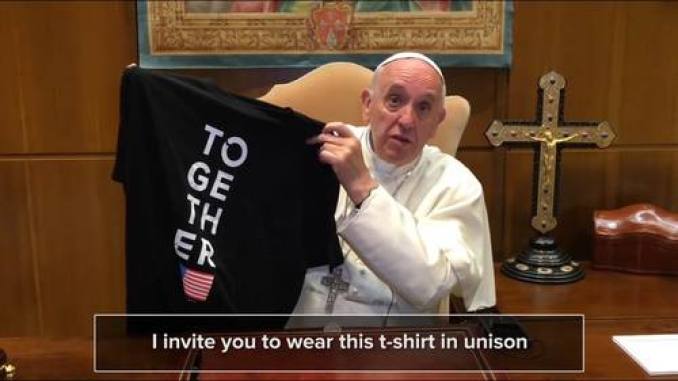 Promotion of Pelagian empowerment wasn’t merely limited to Francis the apostate. Others gave similar appeals for listeners to prompt God to save, to reset, and to act based on their decisions.

Dick Eastman, who heads a ministry called Every Home For Christ, offered the crowd truly heretical misrepresentation of regeneration. Citing “everyone who calls on the name of the Lord will be saved, “ Eastman said, “that’s about 2/3rds of a tweet, and you’re saved!” Jesus apparently now saves, sans that whole “repent and believe” thing, by merely indicating your choice on Twitter.

Eastman went on to name and claim the nation, including every zip code, every street, and every house, for Jesus according to the Message Bible promises of Deuteronomy 26 that were once incorrectly assigned to Israel.

The event was replete with appeals to a false Jesus, offered by the biggest names in evangelical Christendom, and thoroughly void of a presentation of the authentic Gospel of Jesus. It was a festival of apostasy. Thankfully, we have the names of those willing to forego obedience to Scripture. They should, indeed, be marked as “together” … united in the ecumenical apostasy they promote.

The event was scheduled to run from 9 am to 9 pm. God, however, had other plans. He apparently had enough of those prancing across the dais of deception and brought an early end to the apostasy.

By about 4 pm EST, authorities brought the rally to an early end due to the frequency of heat-related illnesses incurred by those in attendance. Over 400 people had to be treated, overwhelming the available EMT and medical services.

“Heat-related illnesses” … hmm. Sort of a divine warning of things to come, methinks, for those who don’t “Repent and Believe.”

And, if you already do repent and believe, you should mark these “leaders” as those eager to gather “together” for the cause of apostasy. “Avoid them.”