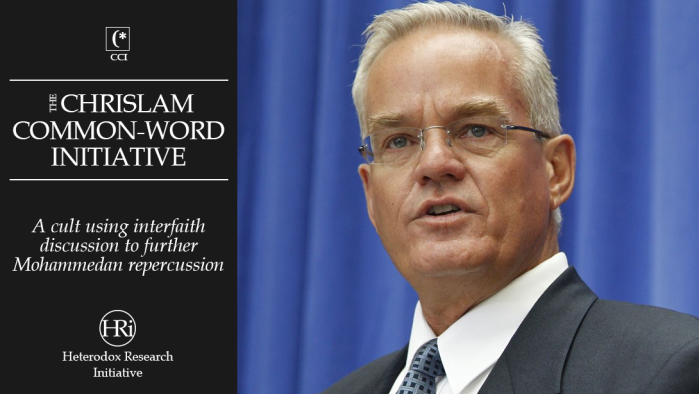 Description: The name ‘Chrislam Common-Word Initiative’ has evolved since it’s inception to capture the origins and evolution of it’s nature.

‘COMMON-WORD’:
On October 13, 2007, a document titled ‘A Common Word Between Us and You‘ was an attempt by 138 Muslim scholars, clerics and intellectuals to unite and find ”common ground’ with the Christian faith (acommonword.com). The wording of this document is based on this passage of the Koran:

“Say: O People of the Scripture! [Christians] Come to a common word between us and you: that we shall worship none but God, and that we shall ascribe no partner unto Him, and that none of us shall take others for lords beside God. And if they turn away, then say: Bear witness that we are they who have surrendered (unto Him).”
AAL ‘IMRAN 3:64 [Emphasis added]

The appeal was made not to Christianity but to the Roman Catholic Church, the New Apostolic Reformation, Purpose Driven Life and Liberal Emergent cults. Thus the cults were quick to engage the ‘Common Word’ agenda with the idea that the bible expects Christians to ‘love God, love neighbour’ without any deeper consideration of the scriptures or consequences what this means to Christians who are fleeing Islamic persecution.

Thus many fell for the ‘Common-Word’ appeal, resulting in the publication of ‘Loving God and Neighbor: A Christian Response to “A Common Word Between Us and You”‘. This document highlighted the agenda of a bunch of leaders who demonstrated their lack of academic and biblical understanding between the two faiths.

‘CHRISLAM’:
It was at this time, the world ‘Chrislam’ was repurposed to expose this agenda and the Common-Word initiative was exposed in their writing:

“We are persuaded that our next step should be for our leaders at every level to meet together and begin the earnest work of determining how God would have us fulfill the requirement that we love God and one another.” – Emphasis added [Source]

‘INITIATIVE’:
In 2012, the Orange County Register published a scandalous story titled ‘Rick Warren builds bridge to Muslims‘, reporting that their efforts, “informally dubbed King’s Way, caps years of outreach between Warren and Muslims”. Rick Warren denied many of the allegations from the news group and other pieces of evidence that started to surface online, but stated that,

“A member of Saddleback started a Bible study, called The King’s Way, with some of our Muslim friends. During the study they started writing down things that they noticed Muslims, Jews, and Christians might have in common: They noticed that all three claim to believe the Great Commandment (“Love God with all you heart and love your Neighbor as yourself”), all three accept the Old Testament as Scripture (and Muslims claim to accept the New Testament also) and all three are monotheistic (one God, not many). They presented these thoughts at the Bible study’s Christmas dinner in December. That’s it!  End of story!  It went no further. No document was signed. No agreement was made. No covenant was approved.  It was just two men sharing their observations at the Bible study dinner regarding what Muslims, Jews, and Christians have in common.” [Source]

Jihad Turk was one of the men who called out Warren’s story and reported the following:

“When I was approached almost two years ago by Saddleback pastor Abraham Meulenberg who expressed interest in exploring ways that we can bring our communities together in friendship, I welcomed the initiative… So, over the past couple of years, Saddleback Church through King’s Way has participated in a number of events with several local Muslim communities. I was invited to give a presentation at Saddleback Church alongside pastor Meulenberg.” [Emphasis added] [Source]

Here are the relevant images that were circulating at the time that were using the theosophical ‘kingdom circle’ approach to finding the ‘common’ interfaith ‘ground’.

Furthermore, the CCI has made an appearance in places like Hillsong (where founder Brian Houston declared Muslims and Christians worship the same God) or Liberal-Emergent cults, playing semantics with Allah and God, Isa and Jesus to further CCI error and heresies. Christians who believe in Jesus and the bible know that they must be faithful, loving and honest witnesses of  their creator. Meaning, if they are witnesses, a convert from Islam to Christianity will not muddy words and confuse people, they will be clear on who they are a disciple too. Witnesses do not hide behind words, perpetrators do.

Many people are not often aware that Islam emerged out of Christianity with Muhammad claiming to be a prophet of God, receiving divine revelation from the arch-angel Gabriel. From the many revelations Muhammad recieved, Islam claims that Jesus was not or man or God and only a prophet, denying Jesus died on the cross for the sins of the world.

When one reads the Koran, it becomes clear that much of the content was written in reaction against Jews and Christians – their doomsday prophet demanding the death to anyone that oppose his views.

The threat to middle-eastern, Arabian or Asian Christian lives and families are real – and the church must love and protect those who are sought to be murdered or persecuted by certain Islamic groups or cults. Christian ‘ministries’ who embrace the CCI are incredibly dangerous for any Christian victims who are fleeing persecution back in their countries ruled by Islamic-extremists. Victims fear that such churches may be compromised and may disclose private information to their CCI networks.

Christianity will always love those in Islam and will do so earnestly by loving them and preaching the gospel to them.

“This is a video that shows how a person of any belief (Muslim, Buddhism, Hinduism, New Age), can enter the Kingdom of God without Christianity. It is taught by those in the C-5 Contextualization movement (like “Jesus in the Qur’an), and is a highly controversial method.”

Source: Stand Up for the Truth, “Kingdom Circles” or How to Enter the Kingdom of God without converting to Christianity, https://www.youtube.com/watch?v=Bu3Lnaj7M_k, Published March 13, 2012.

Loving God and Neighbor: A Christian Response to “A Common Word Between Us and You” [Archived]

The Islamic Center of Southern California, Saddleback Church, and Our Friendship [Archived]