This video of Frank Houston was recently uploaded to YouTube on the 30th of September, 2017.

[EDIT: January 15, 2019 – The video has been pulled. We managed to obtain a copy. Please feel free to listen and download here below]

This was the brief commentary attached: 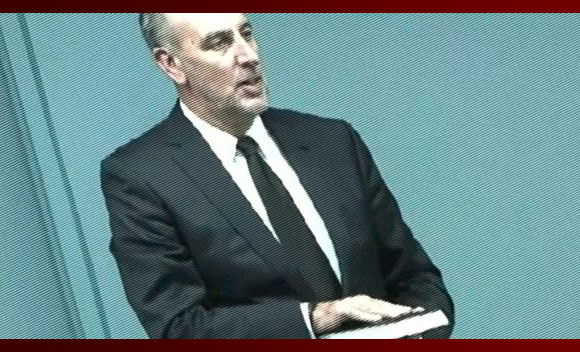 Brian Houston swearing on the bible to tell the truth and the whole truth at the Royal Commission.

EXAMINING THE TIME & PLACE OF ‘SERMON’

The audio reveals Frank speaking in a church service, talking after his wife’s death in 2004. At the 35:55 mark, the congregation inform Frank that the date was the twelfth, the audio inaudible as to what month. However, Frank asked a woman when her birthday was and she claimed, “Two days ago, Friday.”

We can conclude that Frank Houston preached the above sermon on Sunday, the 12th of September, 2004. We can also conclude he is definitely preaching in a church due to the fact there is a worship team, a congregation laughing and people who knew him. So the attached commentary has accurately described the time when Frank Houston preached. However, the heading of the audio states that Frank preached at Hillsong. We are led to believe this considering the heading also states Frank preached “Sept 2004.”

Evidence suggests that this sermon was at Hillsong and judging by the dialogue between Frank and the congregation, they appear to be familiar with him. At 12:25, Frank says: “These folk were at Hazel’s funeral. You were there, weren’t you? Yeah.”

The audio also suggests that Frank Houston was pointing around the room where he was preaching, describing the event: “Down there was packed. They were out on the veranda outside.”

At 2:35, Frank Houston says the following:

She’s married to a great preacher and doing great things in the kingdom of God. And it’s wonderful this, isn’t it? You know, your sons and your daughters and, uh, serving the Lord with gladness!” [2:35]

This quote is damning. This audio suggests there is some peculiar arrangement with pedophile father and son. Leaving legacies or impacting generations is a serious theology in Charismatic and NARismatic circles and quite topical around this time. Back in the year 2000, Brian Houston published his book ‘You Can Change the Future’, a book promoting the Houston legacy and the generations they were impacting. In this book, Brian was not afraid to present his father as a divine, righteous and saintly figure. And in this audio we are seeing a similar pattern that Brian laid out in his book to what Frank is saying about Ben and his Brian Houston.

WHAT DOES THIS MEAN?

Someone who “gives false testimony” at a Royal Commission has committed “an indictable offense,” the consequences of the person lying being “imprisonment for three years.”

The above audio cements the fact that Brian Houston lied to the Royal Commission.

Lie 2: Brian Houston was up front with his congregation about the crimes of his father.

The audio confirms that Frank did continue to preach and that no one in the church seemed to be aware of Frank’s pedophile crimes or predatory behaviour. Even more disturbing, the audio suggests that Frank Houston did not face disciplinary procedures or show any remorse or repentance for his behaviour given the fact he was noting attractive young men in the audience and talking to some at the front, near the platform.

Another disturbing aspect to all this is the fact that Frank Houston was involved in and influenced by the Toronto Blessing. Can we conclude that Hillsong was influenced by this demonic and heavily orchestrated New Apostolic Reformation (NAR) ‘revival’? For all those so-called ‘apostles and prophets’ moving in the ‘spirit’ with words of knowledge, why didn’t anyone call out this sexual predator (who potentially could have preyed upon even more underage victims at the Toronto Blessing)?

Jeff Beacham was an Apostle from Hillsong, an ‘apostle’ who was raised up and assisted the Apostolic Alignment of Todd Bentley in 2008. He died in 2014 of Esophageal Cancer

The top NAR Apostles in the Australian AOG, like David Cartledge, deliberately covered up the crimes of Frank Houston and allowed C. Peter Wagner to portray Hillsong and the Australian AOG as those making Australia, “the first nation in the world to model, as a nation, the new wineskins” for the New Apostolic Reformation cult. In fact, Dr Peter Wagner was a special invited guest at the forming of the Apostolic ‘Australian Christian Churches’ event, and declared “there was no other denomination in the world that had transitioned into an apostolic fellowship as the Assemblies of God in Australia had.”

Yet it appears that even some of their own ‘apostles’, like Beacham, were either kept in the dark about Frank’s crimes or deliberately kept his followers in the dark over Frank’s crimes. Nothing below, not even a hint in the eulogy, suggests that Frank Houston’s life was a lie. Instead – Beacham and Hillsong published these lies:

PROPHETIC TO THE END

A month ago, I lost my greatest spiritual father (see ‘Promotions’ below). I had served Frank Houston for 17 years at Sydney Christian Life Center (now known as the Hillsong Church) before coming to America six years ago. I had spoken with Frank on the phone for an hour a day or so before he passed away and he was very positive as usual, even though he was really missing Hazel, his wife, who had passed away unexpectedly six months earlier. I was intending to visit Frank in Australia next February and the last thing he said before we hung up was, “Well, I am really looking forward to seeing you in February Jeff, but if I don’t see you then I guess I’ll have to wait to see you in Heaven.” He was prophetic to the end.

Frank had the greatest influence upon my spiritual life and was a real ‘father in the faith’ to me. Most of what I know about ministry I learned from him. However, he was not the only ‘father’ I had! I could name several other people who fathered me to one degree or another, some still alive and others already gone.

Hearing the heart cry of several leaders in Dallas for the lack of fatherhood in their spiritual lives made me appreciate more than ever the input from men of God who took time to sow something into my life. They were able to make a difference in me that I am endeavoring to pass on to other younger men and women who are coming on in their faith.

Let me provoke you to jealousy! If, for whatever reason, you have not sought out a ‘son’ to raise in the faith, or if you have not found a ‘father,’ it is never too late to begin. Sons are looking for fathers; fathers need to respond! #

On Sunday evening, November 7th, I received a call from Australia to tell me that Frank Houston, my friend, mentor and founder of Sydney Christian Life Center (known today as the Hillsong Church), had passed away that day at the age of 82.

Upon getting the news of his passing, I caught a flight to Australia a couple of days later and arrived early on the day of the funeral in Sydney. This was my first visit back to Australia in the six years since I came here to the United States. If it is true that you meet everyone you’ve ever known in Heaven, then Frank’s funeral was a little foretaste! There were friends and church family there going as far back as 40 years in one case.

Getting off a plane after a 22 hour flight, feeling jet-lagged, lacking sleep and then meeting just about everyone you have known for decades, plus having to say goodbye to my spiritual father, was a very challenging and surreal experience indeed, bittersweet to be exact. But I wouldn’t have missed it for the world!

Below is a copy of what was included in the funeral service brochure.

Born in Wanganui, New Zealand, on 22nd April 1922, Frank Houston suffered a great deal of sickness as a child. The son of a tough Irish father and a greatly loved mother, Frank was one of four children.

At 18 years of age, young Frank was attending the funeral of his best friend (a Christian) when God spoke to him audibly with the challenge that he was to take his young friend’s place. As a result of that encounter, Frank made a commitment to Christ and was soon training to be a Salvation Army officer. He fell in love with one of his fellow students, and Frank and Hazel were married thereafter in 1948.

Soon they were in ministry and enjoying the first of their five children. Frank and Hazel had a number of postings in the Salvation Army, and were successful young ministers when Frank’s sickness caught up with him. A complete breakdown left the young couple and their small children out of ministry, broken and desperate. At the invitation of a young man, Frank attended an Assemblies of God church and was supernaturally filled with God’s Spirit. He was miraculously healed, and he teamed up with Ray Bloomfield for a series of revival and evangelistic meetings in Ellerslie (Auckland) and Northland.

In 1960, Frank and Hazel moved their young family to Lower Hutt and commenced 18 years of very fruitful ministry. This church became a centre of influence in the 1960s and 1970s with many ministers (including his own son Brian) trained at Christian Life Bible College. During this time, Frank became the Superintendent of the NZ Assemblies of God, and an unprecedented season of church planting, growth and blessing followed. Frank also travelled widely preaching the gospel. Many towns and cities were impacted with moves of the Spirit that, in a number of cases, formed the platform for some of Australasia’s strongest churches.

In 1977, Frank received a vision from Isaiah 54 and God called him to start a work in Sydney. In July that year, at the age of 55, Frank and Hazel pioneered Sydney Christian Life Centre with a team of nine adults and five children. Over the next 22 years, the church was pastored and led by Frank and Hazel and, again, the fruit was astonishing. Upon Frank’s retirement, the Hills and City congregations merged to become Hillsong Church.

Countless thousands of lives, worldwide, have been impacted by the life, passion and ministry of Frank and Hazel Houston, and we give honour to “one man” who, through both good and difficult times, lived a life devoted to Christ.”

We also wish to highlight to viewers how Beacham presents David Cartledge to his audience and how intrinsically involved Hillsong and the Australian AOG were with the American NAR network :

Jeff Beacham’s article was published November 8, 2004 at 3:48 pm,  Posted in FMI Reports by firepowerministries. It has been cached. You can access cached link here.

Like Loading...
‹ The origins of Hillsong (Part 7): Wagner acknowledges Hillsong & AOG are NAR.
Killing Kryptonite – the bait of John Bevere. ›