Home › Hillsong › Carl Lentz refuses to “own the moment” with his view on abortion.

Carl Lentz refuses to “own the moment” with his view on abortion.

While Jesus declared He would build his church, Carl Lentz was on ‘The View’ building his church (cult) – with his brand, his name, his face, his clothes, his styling and now his book ‘Own The Moment’. So when a tough question was thrown at him challenging the foundation his church (cult) is built on, what answer should we expect?

Cutting through Lentz’ grandstanding, Joy Behar asked him about Hillsong’s view on abortion with a very direct question requiring a yes or no answer. His response once again demonstrated that when the tough questions come their way, Hillsong leadership is completely incompetent – because their foundation is not on Christ and His clear teaching but their own ‘vain imagination’.

As a Christian filled with the Spirit why, as NARismatics say, didn’t “the Holy Spirit … teach [Lentz] what [he] should say” (Luke 12:12) before the world on national television? When many Christians protested his pastoral incompetence on ‘The View’, Lentz released the following statement, later picked up by Dr Michael Brown and other ‘Christian’ gag-rags:

“Recently in an interview, I was asked directly if abortion was sin. I did not answer the question directly for a number of reasons and that has caused some confusion about our stance as a church on this matter. I do believe abortion is sinful. Our prayer is that we can continue to help and love those that deal with the pain of regret from personal choices, rather than cast further shame and guilt on those already carrying so much and create a church that can teach people how to form convictions based on God’s Word, that will be the driving force in all their decisions. I will continue to point people to Jesus, above all else, every opportunity I get. The story of God’s redemptive grace, available to all, is the best news available.” 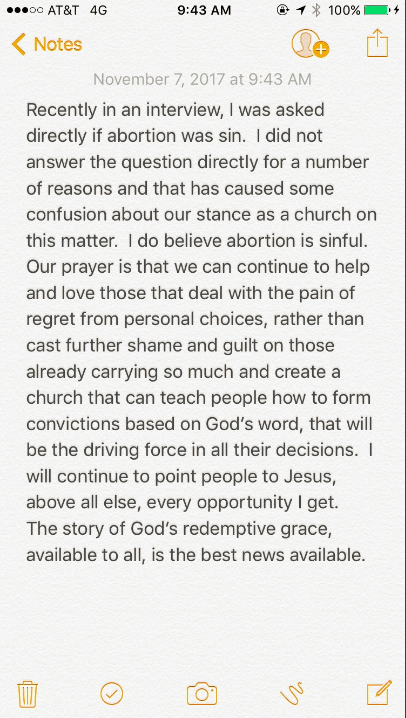 Unfortunately, too many Christians continue to call this movement a church when it clearly is pushing its own cultish agenda, constructing a Jesus that only a secular world could love. And it’s only when challenged by true believers that Hillsong say something else (flip-flop) in order to appease their critics. Just like Hillsong leader Brian Houston, we are seeing the same rot emerging from Carl Lentz – leadership that has no foundation and fortitude in Christ but rather built on the vain egos of men.

It seems the world can see through the facade of Carl Lentz and Hillsong but not the many thousands of Hillsong followers. Carl Lentz failing the abortion question is like an adult failing a five year old’s Sunday school question. Putting it bluntly, Hillsong is without excuse.

Carl Lentz was a graduate of Hillsong Bible College and specifically chosen by Hillsong leadership to represent their brand in the USA. So the basic questions need to be asked.

Why did Hillsong choose someone this theologically inept and incompetent as a pastor, to represent the Christian faith? Is Carl Lentz really the best they’ve got? Is this the best type of crop one can expect tp get from Hillsong bible college?