Recently Amanda Wells, who is now working for Kingdom Catalysts, (website here), took to Facebook claiming her sister “got herself on 60 Minutes and decimates Brian Houston and Hillsong, saying it was a cult and full of pedophiles and on and on..”

Here is the 60 Minutes footage that Amanda Wells referenced. We couldn’t see where Kerri Ferguson “decimated Brian Houston and Hillsong, saying it was a cult and full of pedophiles and on and on. Can you?

Amanda Wells goes on to claim that her sister “took two of Phil Pringle’s pastors to court and defamed them and destroyed them, meanwhile accusing CCC of all sorts of things (easy to find on the internet).” 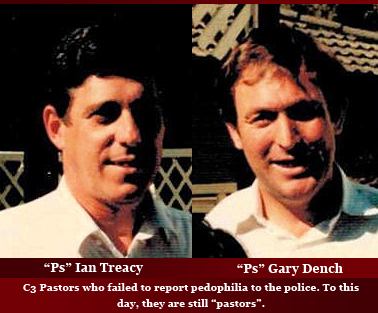 Easy to find on the internet – really? The newspapers reported back in 1990 that these pastors were at the trial of Kerry’s husband, defending the perpetrator and not her sexually abused son (see ‘Source’ link to read the original news articles):

“Pastor Dench was less forthcoming. Claiming to defend the secrets of the confessional, the clergyman refused to tell the District Court what Dent had said to him. “I will not, before God, give evidence about confessional matters,” he declared.

The reason why Ferguson’s case escalated from Phil Pringle and then to Brian Houston, was because C3 leadership defended a physical/sexual abuser, refusing to report him to the proper authorities.

Brian Houston became involved with Kerri Ferguson because Phil Pringle did nothing. What made matters worse for Brian Houston was his defence of the C3 leadership – those who defended the sexual abuser and ended up criticising the physically abused mother. The evidence Kerri Ferguson submitted to the Royal Commission exposed the fact that Brian Houston was prepared to smear her character (“you seem to be a very hurt and bitter person”) and lie about their previous meeting, wanting nothing to do with her:

A quick reminder – to this day neither Brian Houston or Phil Pringle have reached out to assist Kerrie Fergusson or her son. To this day neither Brian Houston, his elders or anyone in Hillsong leadership, including their ‘virtue signalling #metoo pastrixs’, have reached out to Frank Houston’s sexual abuse victims –  a 20 year cover-up finally exposed by a Royal Commission. 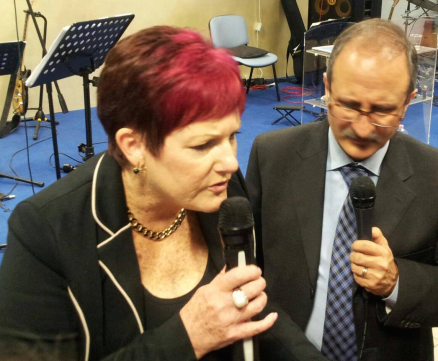 The irony in Amanda Wells’s rants is that she is lecturing her followers on what love is, despite never repenting of her lies and plagiarism while she was an ‘Apostle/Prophet’ at Glory City Church. And to publicly defame her sister and suggest her story about her sexually abused son is “3rd defamation and craziness” in an attempt elevate herself as a teacher who knows all about ‘love’, is setting the bar on Christ-like ‘love’ very, very low.

‘Weeding Out Wells’ – an in-depth look at the scandals surrounding Amanda Wells.

‘Fighting For The Faith’ sermon reviews on Amanda Wells.

I read the article that was written in the Guardian and the SMH about the woman who went to Folau’s church and says its a sect.

I have an issue with this. I know what people say about Hillsong and CCC etc……. my sister was one. She got herself on 60 minutes and decimated Brian Houston and Hillsong, saying it was a cult and full of pedophiles and on and on, and people, particularly Christians believed her! Then she took two of Phil Pringles Pastors to court defamed them and destroyed them, meanwhile accusing CCC of all sorts of things ( easy to find on the internet)

Now if I read what she wrote, if I watch her on 60 minutes where she had her 15 minutes of fame, I have a choice do I believe what she is saying about these Pastors and their churches. (Well I have known her for years so the answer for my brother and I and the family she stayed with in America is dear God NOOOOOOO…….though many churches in Australia got sucked into her 3rd defamation and craziness) The point is I have the choice to believe someone who has an obvious issue with church, or I can believe the Bible…. don’t judge and for heaven sake do correct investigation!!!

Now lets get back to this mother…. she says Israel Folau’s church is a cult. One thing she says proves it is because they say she must be Born Again……… straight away I look and see right the church is being seen through the eyes of someone who ISN’T born again. You see beyond every other tenant of faith and doctrine THIS ONE is the ONE every Christian believes is the basic foundational tenant.

So what credence do I give when ONE WOMAN goes to a church and comes out with statements she interpreted through a filter and then goes to a newspaper…………NONE absolutely NONE, believe me from experience we should be sensible enough to take this for what it is……. and it certainly isn’t Christian LOVE

Now the next thing is that Christians who are now willing to believe these hurt women and their assault on Churches and Pastors believe what Israel said was hate speech!!!

I don’t myself agree or like what Israel wrote. I possibly wouldn’t have written it like that BUT at the same time I cant call it hate speech do you know why……… Because it is in the Bible

You see the drunkards and the adulterers didn’t come out screaming HATE it was just one group and unfortunately the bible talks about all kinds of people and I can’t rewrite it because it challenges me, or my lifestyle and it might hurt my feelings.

All I can say is thank God Paul didn’t throw a temper tantrum and say to the Corinthians or the Galatians ‘well now because you lot are not behaving as I think you should Im not going to be part of you and not going to call myself a Christian anymore.’

No Paul said ‘let us love one another.’

Even the Folau’s, Hillsong church or ACL. Let’s understand the way they read and repeat the Bible maybe different to how we do BUT Jesus is the common denominator and nothing else.

The Bible is full of pretty torrid words, killing babies, telling there will be people that wont walk in the Kingdom etc BUT it isn’t HATE speech its called interpretation……… maybe different for each of us, but because someone doesn’t agree with your ethos and ideology does not make them less a person, it makes them different.

It doesn’t make them less a Christian it makes them have a different opinion. The day I stand and say I don’t think so and so is a Christian because its not what I believe a Christian should like ……. IS THE DAY I JUST BECAME GOD!!!! As far as I know He hasn’t resigned His position yet”

Attached is a list of articles on the C3 pedophilia scandal that Phil Pringle and Brian Houston refused to be accountable for:

Like Loading...
‹ Is the New Apostolic Reformation rallying behind high-profile figures in Australia?
When Hillsong ‘goes to market’ – reaching out or selling out? ›