Request: We encourage C3 leaders who have concerns about Kong Hee and are  attending this meeting to keep a ‘record’ of what Kong Hee and Phil Pringle say.

We summarise the public lies of Kong Hee, and remind the readers that the next tranche of the trial is underway at the moment.

A “non-exhaustive list of the lies” of Kong Hee

In spite of Kong Hee being publicly exposed for misleading his church, and Singapore media, Phil Pringle still sees no problem with Kong Hee speaking in his churches and conferences. Tomorrow, Phil Pringle has invited Kong Hee to speak at his leaders meeting.

We notice that Phil Pringle appears to be selective as to what information is made public. A few years ago, Phil Pringle ‘blacked out’ his cameras and mislead his church about the ongoing events with the trial and according to an insider, informed his members that C3 was “receiving bad press and wanted the church to get online on twitter and facebook and say good things”.

With Kong Hee speaking this Tuesday night we would like to remind people of this article written by a C3 insider, concerned about Pringle’s secrecy and his insistence that Kong did not copy the way he financially runs C3 church.

The C3 Journal advertises the following,

ALL IN Team Night – February 10

Ps Phil Pringle and Ps Kong Hee from City Harvest Singapore will be downloading vision, wisdom and encouragement to our leaders and valued team.

You are so welcome if you consider yourself part of our team of dedicated volunteers that make church happen week in and week out. 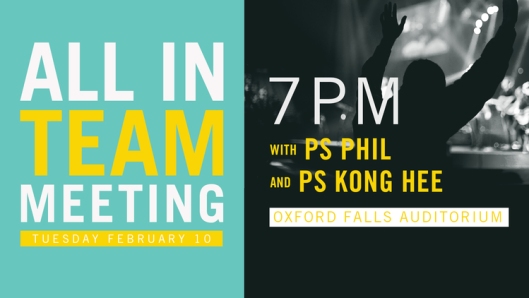 It appears that Phil Pringle will fight for his ‘protege’ all the way. Having ‘laid his cards on the table’, it’s up to C3 members to decide if they want to continue to endorse Kong Hee, despite the ongoing trial and the evidence submitted by Chew Eng Han. Isn’t it in the best interests of all involved to await the outcome of this very serious trial and its very serious charges before exposing the various C3 congregations to Kong Hee as a competent ‘leader’?

Below are older articles exposing how involved Phil Pringle of C3 Church is with his protege Kong Hee. This scandal does not stop at City Harvest Church. People need to hold the same level of scrutiny on Phil Pringle.

1. How Phil Pringle prophesied over Kong Hee’s direction in owning SunTec and turning his wife into an intertional popstar.
2. How Phil Pringle used his church and annual Sydney conferences to financially mislead his global audience into financing Kong Hee’s lawyers.
3. How Kong Hee claimed he copied his ministry from Phil Pringle and how this appears to be true from a C3 witness.

Interview With Pringle Offers Insight to His Relations With Kong Hee

Kong Hee To Phil Pringle: “You created this mess! You’ve Got To Come And Help Us Fix It”

Of Course Pringle Is Uh- Telling The- Uh- Truth About Kong Uh- Hee And Sun- Uh-Ho!