The Straits Times has officially reported that Apostle Kong Hee is back in court on April 7:

For your convenience, this article will provide as a resource. We will:

This was the allegation that was being disputed in court:

This was the verdict on each individual.

The MotherShip reports on what the verdict is by the prosecution:

Appeal by prosecution to up sentences

Prosecutors have urged the High Court to to increase the sentences of all six leaders, and not only uphold the convictions:

We encourage you to look at how Kong Hee has maligned and demonized his own government in the process of the investigation and court case (this is NOT the way any Christian or pastor is meant to behave biblically):

(Contact us if you want any audio or video footage from any video/transcript in above links.)

We also believe it is important for people to listen to or read how ‘Apostle’ Kong Hee and ‘Apostle’ Phil Pringle have used the opportunity (whenever Kong Hee has traveled oversees), to attack the integrity of the Singaporean government’s handling of the investigation and court case, alongside their deplorable behaviour in deceiving people into giving money to support Kong Hee’s lawyers. 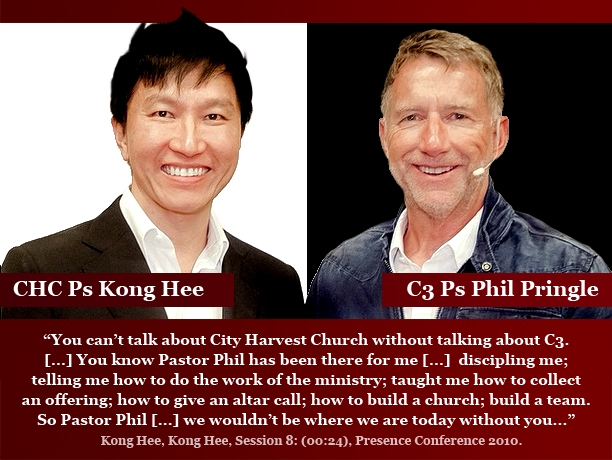 Chris Rosebrough covers Kong Hee’s verdict… and Phil Pringle’s involvement.
Collection of Pringle and Kong’s CHC/C3 prophetic and financial exploits.
Phil Pringle prophesying: “We pronounce deliverance in JESUS NAME. NOT ONE NIGHT WILL THIS FAIR HEAD SPEND BEHIND BARS.”
Kong Hee: “And then fifteen years later, we got the building. And now we’re in all this mess. So, I told Pastor Phil, “You created this mess! You’ve got to come and help us fix it”. And he’s done such a great job!””

(Contact us if you want any audio or video footage from any transcript available in above links.)

WHAT IS CHC AND WHAT IS ITS NATURE?

It is important to note that Apostle Kong Hee is part of a global movement known as the New Apostolic Reformation (NAR). Their NAR involvement plays a pivotol role in the investigation and this entire court case. It is a movement that is governed by ‘end-times prophets and apostles’. Kong Hee and CHC were attempting to fulfill the NAR Seven Mountain mandate (aka Cultural Mandate) through Sun Ho. Furthermore, not only are CHC’s advisory pastors Phil Pringle and A.R. Bernard NAR Apostles, these men in the video below, or links, are also Apostles of the global New Apostolic Reformation network. (Warning: contents of this video may disturb some viewers. It is extreme satire.)

(For more information on the NAR, please contact us.)

Videos of Kong Hee unethically exploiting people to give into his building fund:

(Please contact us if you want the above video footage or additional footage.)

Email all comments and questions to c3churchwatch@hotmail.com.