Looking back through history there’s obvious evidence of women successfully ‘leading’ in secular society. Moving forward in the western world, more progress for ‘women’s rights’ has been made, whether it be the right to vote, the right to education or the ability to lead governments wisely.

However the push-back from men who want women to ‘lead’ in the church has become one of the most troubling symptoms of our society today. An example being the recent Instagram ‘narrative’ where we saw a series of bizarre and totally unbiblical posts by C3 San Diego’s lead pastor Jurgen Matthesius, trying to justify a ‘biblical’ role for women pastors in the church. All this done to show support for not only Beth Moore, Jurgen also included Paula White, Lisa Bevere, Christine Caine, Joyce Meyer, Chris Pringle and Bobbie Houston – despite none being ‘qualified’, not only on the basis of gender but for their aberrant false teaching as well.

This problem is also reflected in the LGBTQ etc movement where we see a parallel attack on the pulpit – for example the push to accept and ordain practicing homosexuals in the church. As CWC noted in a recent article:

‘Just as barriers to women and homosexuals have been removed in other areas of civic life and the workplace, the same demand is made on the church.’ (Link)

And it’s also interesting (as shown above) that the men demanding this role be given to women are, more often than not, part of the movements we critique here at Church Watch Central – Hillsong, C3 Church, Elevation Church and Bethel Redding just to name a few. The men leading (and attending) these same movements claim to love God’s Word yet by their own ‘vocal demands’ prove they do not love their wives enough to warn them of God’s clear commands. Don’t they want their wives to ‘grow in godliness and holiness’? Has the ‘feminisation’ of their unbiblical worldview corrupted their thinking, or has the Lord Himself given them over to a corrupt mind?

“But understand this, that in the last days there will come times of difficulty. For people will be lovers of self, lovers of money, proud, arrogant, abusive, disobedient to their parents, ungrateful, unholy, heartless, unappeasable, slanderous, without self-control, brutal, not loving good, treacherous, reckless, swollen with conceit, lovers of pleasure rather than lovers of God, having the appearance of godliness, but denying its power. Avoid such people. For among them are those who creep into households and capture weak women, burdened with sins and led astray by various passions, always learning and never able to arrive at a knowledge of the truth. Just as Jannes and Jambres opposed Moses, so these men also oppose the truth, men corrupted in mind and disqualified regarding the faith.” 2 Timothy 3:1-8

From a series of articles from Michelle Lesley where she addresses the role of women in the church, the article below is very relevant for today. 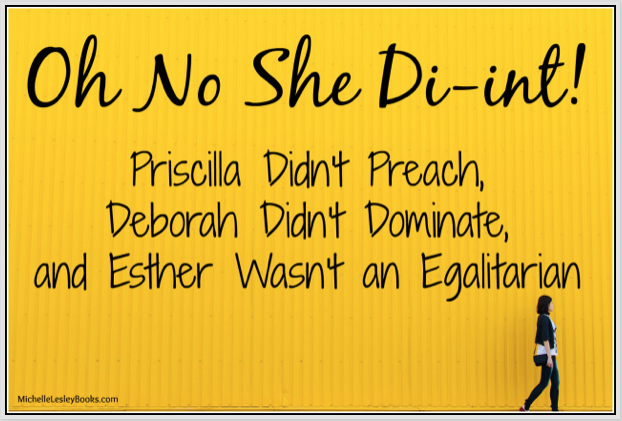 Michelle Lesley writes in response to a question:

That’s one of the arguments often put forth by people who reject what God’s word plainly says about the biblical role of women in the church. And the short answer is very simple: Yes and no, and so what?

But maybe a longer answer would be better.

Broadly speaking, there are two main types of Scripture: descriptive and prescriptive. Descriptive passages describe something that happened: Noah built an ark. Esther became queen. Paul got shipwrecked. These passages simply tell us what happened to somebody. Prescriptive passages are commands or statements to obey. Don’t lie. Share the gospel. Forgive others.

What we would not do is look at David’s and Solomon’s lives and conclude that polygamy is God’s design for marriage. We would not read about Hosea and assume that God wants Christian men to marry prostitutes. We would not read the story of the woman at the well and think that being married five times and then shacking up with number six is OK with Jesus.

But just for funzies, let’s take a quick look at these ladies so often trotted out in defense of Christian women disobeying Scripture. (If you’re unclear as to what God’s word says about women’s role in the church, you might want to check out this article and this article before reading further.)

Deborah was a judge. She decided disputes between Israelites and discussed with Barak battle instructions that God had already revealed to him. When Barak refused to stand up and fight like a man, God used Deborah, a woman, to show him that another woman, Jael, would get the glory for killing Sisera. In a patriarchal society a woman in leadership and a female war hero would not have been seen by men or women as a positive thing, but rather as shaming men who were too cowardly to step up, lead, and protect their women and children.

Huldah was a prophetess. She was sent for during the reign of Josiah when the temple was being repaired and the priests hadn’t even been able to find the book of the law for years. Again, what does it say about the spiritual condition of the most important men in the country – the king and the high priest – when they, in a highly patriarchal society, have to humble themselves and seek out a woman to tell them what God says? Huldah repeated to them what God had told her, and that was it. Since we now have God’s written word and He no longer speaks through direct revelation this way, there is no parallel between Huldah and New Testament women preaching, teaching, and exercising authority.

Esther, under threat of death, couldn’t even talk to her own husband without his permission, so I’m not really sure why people seem to think she exercised any authority over men. In fact, the writer of the book of Esther several times makes a point of saying how obedient she was to Mordecai. Esther wasn’t a spiritual leader, she was a queen. The word “God” isn’t even mentioned in her book, and she certainly didn’t instruct anybody in the Scriptures. Esther is probably one of the weakest examples you could come up with as support for women preaching, teaching, or exercising authority in the church.

The Women at Jesus’ Tomb, Priscilla, and Phoebe

The women at Jesus’ tomb were sort of Old Testament-ish, too, if you think about it. The church didn’t yet exist when they saw Jesus resurrected and ran back to tell the disciples about it. Still, this was not preaching, teaching, or holding authority over the disciples even in a non-church setting. This was a) giving eyewitness testimony of what they had seen and b) carrying a message from Jesus to the disciples. There was no commentary or instruction from the women to the disciples, just a report on what they had seen and a message of where Jesus and the disciples would meet up. And, really, don’t people usually see “messenger boys” (or girls) as subservient to the people they’re carrying messages between?

Priscilla (or Prisca) might be the best known Christian woman in the church era of the New Testament. When people try to use her as an argument for female preachers, teachers, and authority, they usually go to Acts 18:26 which says that she and her husband took Apollos aside and fully explained the gospel to him. This was a private meeting among the three of them, likely in their home over a meal or other casual circumstances, not preaching or teaching in the church. Additionally, the Bible makes absolutely no mention of how much, if any, of the actual “explaining” Priscilla did. It’s quite possible she just sat by as Aquila did the majority of the explaining and contributed only here and there or when Aquila forgot something.

Phoebe is mentioned once in the New Testament, in Romans 16:1-2. Paul commends her to the church at Rome and asks them to help her out because she has been a good servant of the church at Cenchreae. That the word “servant” can also be translated as “deaconess” in no way indicates that Phoebe (or Priscilla or any of the other women mentioned in Romans 16) preached to or taught men or exercised authority over men, despite the fact that male deacons today might do such things. The Greek word diakonos simply means “servant.” Acts 6:1-6 gives us a glimpse at some of the services the early deacons likely provided- “waiting tables” and meeting the physical needs of the believers. The apostles even drew a distinction between their preaching of the word and the need for others to minister to the material needs of the people.

While there are numerous, important ways God wants Christian women to serve Him in the church, the Bible is clear that we are not to preach to or teach men or exercise authority over men in the assembly of believers. We are to follow in the footsteps of godly women like Esther, Priscilla, and all the others by humbly submitting to His word and obeying it.

“I cannot emphasize enough how important it is that women grow in godliness and holiness. Listen to the preaching of the word, and do what it says. Your selfish frustration in reading “quietly with all submissiveness” will cause you to miss the instruction “let a woman learn!” A strong woman of God is supposed to be a woman educated in the ways of God. Feminists hate this. They don’t want women to be strong in the faith. They want them to be weak (2 Timothy 3:6). Strong women aren’t easily manipulated by their lies – the same lies of that ancient serpent who hissed at Eve, “Did God really say…?” (Genesis 3:1)” Ps. Gabe Hughes

Like Loading...
‹ Exposing Brian Houston – an inconvenient truth.
Following ‘You the Leader’ – or following the Great Shepherd. ›